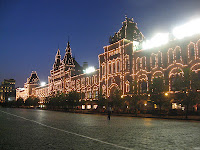 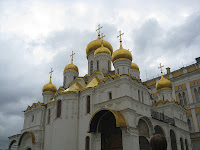 This is to introduce my “friend” who is actually my sister, just back from a short trip to Russia and is my guest blogger today.

*First stop, Moscow.  Traffic is extremely heavy, streets are crowded, people are in a hurry, no smiles.  People are dressed in the “latest” fashion – women (and men) are extremely slender.  Lots of beautiful shoes! .

*Our guides in both Moscow and St. Petersburg were very passionate about their particular city; their city-pride showed.  Understandably they were reluctant to discuss country problems or politics.  But both guides were able to recite lots of facts, dates, names in  Russia’s history.  The Moscow guide told us that Russia never invaded any other country without provocation.  The St. Petersburg guide told us that her relatives at the time of the Revolution were “good people with some bad ideas.”

*The beauty and amazing number of churches, and in particular St. Basils and the Sergiyev Posad  Monastery took my breath away.  Entering the Monastery on a chilly morning, hearing the singing of church music that my mother sang, seeing many, many lit candles, hearing the priests chanting, and the smell of incense (plus the stern almost-disapproval look of the old ladies around the perimeter of the church) – immediately transported me back to my childhood.

*The interaction with the Russian people including those in the “service business” was extremely disappointing.  Waiters and waitresses in restaurants seem to barely tolerate us.  They didn’t speak English (which I can understand and don’t expect when I travel) – but they didn’t care to even try to communicate.  Is it arrogance, is it indifference – maybe a bit of both.

*Usually in another country, if one tries to use the native language, local folks are appreciative and somewhat impressed.  Not so in Russia.

*We took a boat ride on the Neva River to celebrate White Nights (where the skies are light almost all night long).  The boat was decrepit (although we paid $300USD for the 4 of us for the evening) and thoughts of our safety were constantly in my mind. The “crew” consisted of 3 young men – probably early 20’s.  They were totally disinterested in us, the “cruise” , the situation and even each other. And another disquieting thought, no life jackets. 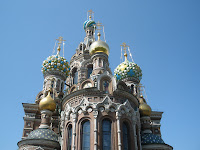 *In Red Square, we saw a woman selling a plastic “shooter” toy which shoots bubbles into the air.  She was sitting in the square, her head tiredly-propped up on one hand, and the other hand a bit outstretched, limply demonstrating the toy.  The saddest, most disconnected face, although the toy is meant to bring happy times and fun for children.  She was definitely not a good spokesperson to promote sales but conveyed the mood of many people we saw.

*We took the Sapsan train between Moscow and St. Petersburg.  Probably the nicest train I have ever ridden.  Beautiful, clean – punctual.  A great experience.

*We watched the USA vs. Finland World Championship hockey game (US sadly lost in the last few seconds I think).  I believe the TV channel was a Polish origination.  The announcer was definitely biased against the US.  He would almost cheer when we didn’t score or made an error.  But we were more shocked to see that they had an ad for bullets!  Yes, a magazine (is that what they call it?) to go into a small pistol – which they demonstrated by pulling it out of a man’s lapel. Perhaps that is why there are so many men in Moscow wearing suits and dressy jackets.

*Everywhere we went, people cut the lines.  I can’t say that the cutters were only Russians, I think other nationalities did it as well.  I don’t understand the thinking behind doing that.  Is it that I am more important than you?  My time is more valuable than yours?  It’s such a rude act.

*We found it difficult to locate Russian restaurants serving Russian food.  We ate Italian food almost every evening we were there.  I asked a local girl about that and she told me that Russians can easily make Borscht soup at home.  When they go out they want to eat something they don’t cook.  I guess that makes sense.

*We only had a brief glimpse at Russia and its people.  But remembering my parents (particularly my mother) being so vivacious, energetic, positive and enthusiastic (about almost everything), it was hard to connect that memory to the people we were meeting.

My post script: My sister did see relatives in St. Petersburg and had a happy reunion with them.  Her time in Russia was short, less than 10 days, but this gives you a  small snapshot of the country where our parents were born.  To say that things have changed, is an understatement, but that is true everywhere.  What has not changed is the effect of 70 years of communist rule which to me is a weight, dragging down the spirit of the people.  Although they have more freedom since 1989, the policies and the attitudes of the people in power are a carryover from those years.


Bolshoi spaseba (big thank you) to my sister for being my guest blogger today.

Have you taken trips that have surprised or disappointed you or delighted you?

Posted by loverofwords at 9:33 AM