Alas!  Poor Rick,
We knew him not,
But no secrets would he divulge
No explanation of his violent demise,
Those vacant orbs told us nothing.

And the Forensic Pathology Exam
is Monday.  Alas!

This is for the weekend Trifecta Writing Challenge.  Write 33 words, inspired by the photograph
www.trifectawritingchallenge.com

Digression #1 The Red Bracelet, or why I love Oscar 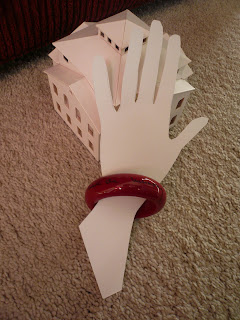 This is a frivolous digression from my writing blog.  Oscar de la Renta's facebook page offered bangle bracelets  with writing on them, and as a "lover of words," I succumbed to my impulse purchase gene and bought one.  The phrase written on a red one was, "I have the memory of a mosquito.  Love, Oscar."  How could I resist?  How did he know he voiced my theme song? The bracelet arrived by Fed Ex, encased in a drawstring bag with three perfume samples included.  I was transported to femininity heaven.  First rule of retail (not only retail), make the customer feel special.
Posted by loverofwords at 10:38 AM 2 comments:

My Last Duchess by Robert Browning

Flirtatious wife, disdainful duchess of husband's title
coquettishly smiling at others while dangerously ignoring his warnings,
is murderously cast aside as husband looks for wealthy replacement,
while gazing at his trophy, her portrait.

My Boy Jack by Rudyard Kipling

Has anyone seen my boy Jack?
The tides of war took him away
to the Somme's mud-bogged trenches and
held him through pitiless nights.

Where oh where has my little boy gone?


http://www.trifectawritingchallenge.com   "Re-write a well-known poem, story or fable in 33 words."
Posted by loverofwords at 7:28 AM 9 comments:


Red car, red car, red car; blue car, blue car, blue car. The small blonde-haired boy bent over the toy cars, intently arranging them in the same pattern again, and again. As his mother watched, her face a mixture of fatigue and questioning, she asked herself the same questions she had asked herself so many times. Why the intense fixation over certain toys; the meltdowns, screams over unseen terrors; no response to hugs, so many unfixable behaviors, and most difficult of all, no words, just sounds and small grunts to indicate desires.

As she watched, an image came to her. There is a deep, dark space between us; his thoughts cannot reach me. I cannot comprehend what he wants, what he thinks, how to help him.

The past few years came rushing back, their joy at having their first child, but as time went by, the realization that something was very, very wrong. Tests, doctors, therapists, psychologists, always searching for answers, a way to make Matthew whole, but there were no answers. Her marriage slowly disintegrating from stress and lack of attention. Her husband away at work for longer and longer hours.

As she watched the cars being lined up, her small son seemed to take no notice of her. She tried crossing that deep, dark space again. "Matthew, Matthew, where are you?" He looked up. "Mama?" he said.

This is my entry:  http://www.trifectawritingchallenge.com/
Posted by loverofwords at 11:35 AM 23 comments:

Lost, can't see the trail, just snow and icy whiteness.  So deathly cold, my legs won't move, can't move, must rest now.  Christmas, the tree is shroud-like white, but the blanket, the one with the small pink rabbits covers me--the last sleep.


This is for the weekend http://www.trifectawritingchallenge.com/:  write a story in three sentences.
Posted by loverofwords at 10:51 AM 21 comments:

Joe always hated his name. That is, until he found out that his beloved Marilyn had been married to Joe DiMaggio–imagine that, married to a "Joe;" she must have loved him, he thought. " Joe, Joe, Joe" she would have said, and through time, those words drifted over to him, resonated in his mind and became her words to him.

It was the white dress that did it. When he saw the movie, "The Seven Year Itch," and saw her standing over the transom, her hands holding down the white, accordion-pleated dress, as the skirt blew around her, her red lips parted in a huge smile, obviously enjoying the sensation. She was pure sex and he felt pure lust. He fell in love.

From then on she became an obsession. Her image engraved in his brain. Every photograph, every bit of trivia that he could afford, he carefully collected and displayed. Many evenings at home, he would rearrange his Marilyn memorabilia over and over again--photographs, books, dolls, so many things. His favorite was a Marilyn wall clock-- her legs were the hands of the clock, and some of the positions were quite erotic–his favorite ebay acquisition.

Sometimes, feeling especially lonely and vulnerable, he would stare at his favorite photograph of her–looking sad and lonely too. She understands, she knows how I feel, he thought.

There were times when a very strong feeling would come over him; it was hard to describe, it was as if he became someone else.
He opened his closet door. . . . . . . . .

Time passed.
The door of Joe’s row apartment opened, and a very attractive blond walked out. It was a warm summer evening and she wore a clingy, jersey dress that accentuated her curvy figure. Her makeup was carefully applied, the red lips accentuated into a pout. Was that a mole on her lower cheek? She walked down the street with small, sometimes unsteady steps, and disappeared into the night.


(This is my entry for the February 2nd, trifecta writing challenge. http://www.trifectawritingchallenge.com/ )
Posted by loverofwords at 1:47 PM 18 comments: