"There's nothing cute about it, " he said.  The register of his voice indicated decision more so than discussion.
She agreed heartily and privately, staring past his head and out the window behind him.

Thinking about the deliciousness of her affair, she blotted out his words.  Admitting her transgression, saying that the object of her tryst was "cute," hoping finally her misery would end, and it did.


Using Trifecta's prompt, "There's nothing cute about it," add your own addition in 33 words.
www.trifectawritingchallenge.com
Posted by loverofwords at 10:49 AM 15 comments:

Peyton Manning has signed with the Denver Broncos.  The photo says it all.  Good by to Tebow mania, good by to all that.  Thanks for reviving the Broncos last season with some incredible plays, but not enough to stop the hunt for another quarterback.

Jason Gay, in his article in the Wall Street Journal a few days ago wrote:  "If Tebow is shoved out of a franchise he revived, I can't wait for the day he comes back and plays the Broncos.  I want to see 6-of 22 passing for 78 yards.  I want to see passes that wobble like Zip-Loc bags full of soup.  But I also want to see a last-minute drive win it.  I'll be pulling for Tebow to exact a Tebow-like revenge.  And I know what you did last autumn.  Don't pretend to be so tough.  You'll be pulling for Tebow too."   Yes! 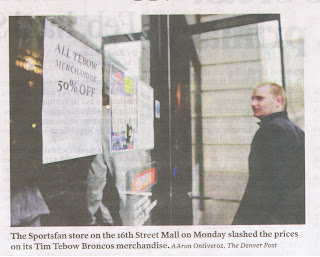 Did Vince Lombardi say, "Winning isn't everything.  It's the only thing."?
Posted by loverofwords at 10:54 AM 1 comment:

Where are you my friend?
In the confused labyrinth
of your mind,
I cannot find you.


The answer--
three squeezes
from your hand.


Peyton Manning or. . .what do I do with my billions?

Here in Denver, it has been an interesting week as the Denver Broncos try hard to woo Peyton Manning to the Bronco fold.  Peyton Manning is the star of football’s free agent week as several teams around the country vie for his quarterback services and star talent.  Denver desperately wants to win a Super Bowl title which the team hasn’t since the John Elway days.  Now, John Elway, an executive VP of the Broncos, is the Svengali who is pursuing Manning with owner Pat Bowlen’s blessing, trampling Tim Tebow in the dirt.

As a “lover of words,” but not a lover of football, just ask my ex-husband, I have been reading the Denver Post sports pages and avidly following their excellent sports writers, Mark Kiszla and Woody Paige.  Apparently the latest suitor is the Tennessee Titans whose owner has deep, deep, pockets.  The pull of past history (Manning played for the Big Orange) and being adored by the people of Tennessee, as Kiszla says, “to this day, you can enter houses in the State, where a room will have more photos of Peyton than their own children, and the fact that his wife is from Tennessee, will perhaps influence him to choose Tennessee.  Kiszla further says, “If you don’t think that will be a factor in his decision, you have not been married.”

What to do with millions to a billion or two, if you are a member of the male sex?  More houses in Aspen? nah; island (Johnny Depp); planes (already have them); vineyards; golf courses; TV stations; no no and no.  But a sports franchise YES! A live chess game you can have all to yourself.   Even Russian billionaires have dabbled in the sports franchise market–Mikhail Prokhorov who bought the New York Mets is part of the club.

Although there have been a few women who enter this heady world, most are men.  It’s interesting to note that Oprah Winfry, who could certainly buy a franchise, opened a school for girls in South Africa instead.
Posted by loverofwords at 11:46 AM 6 comments:

"The sky is falling, said the Little Red Hen.' 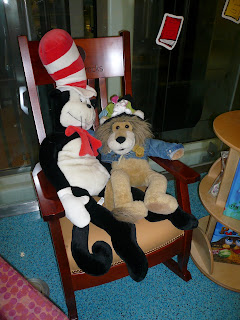 Hobbes, a stuffed lion puppet, and my alter ego, visited Children's Hospital, here in Denver to help celebrate Dr. Seuss' birthday, Friday, March 2.  Reading Dr. Seuss books to the children who were there, either visiting, or on their way to treatments was fun for Hobbes, especially when some of the children tried to make him talk. The volunteer groups were wonderful, distributing Dr. Seuss books, reading to the children and visiting the kids in the wards.  Craft tables were set up so some of the kids could make Dr. Seuss hats.  Character volunteers, Rapunzel and two beautifully costumed fairies, were also there enchanting the children and posing for pictures.  Hobbes wishes we could post pictures of the kids but because of privacy issues, we cannot. "The Gift of Gracie" is the name of the volunteer organization that sponsored the Friday event.  Hobbes was pleased he was invited and wishes he could have done more.  Teacher organizations, Firefighter Organizations, Therapy Dogs, Kohls Department Store, all contributed their time, as well as the staff of Children's Hospital.

And that was that, said the Cat in the Hat!
Posted by loverofwords at 2:38 PM 2 comments:

The phone rang at 4 am, reluctantly she lifted the receiver and heard a familiar melody,
"I am the Lord High Executioner," a pause, then,
"Ring around the rosy, . . .ashes, ashes, all fall down,"

This is an amazing story by a South African writer, H.C. Bosman, which I stumbled upon.  I could not stop reading until the end.  I am in awe of writers who actually make you hold your breath, writing which makes you think about the story long after you finish, and writing that makes you ask questions.

A diversion for a snowy day.  I think I am getting addicted to blogging.

Posted by loverofwords at 11:46 AM No comments: