The Denver Broncos are in the Super Bowl

Denver, Colorado is awash in Orange and Blue, the Bronco football team's official colors.  Not having been to the Super Bowl for twelve years, the opportunity is even sweeter.  Our hometown news paper, "The Denver Post," has daily articles about various players, strategies, the weather, etc.  And even for a non-football person like I am, remembering the old days watching the Broncos in sub-zero weather, taking every advantage to rush into the ladies room to get warm, I am enjoying learning more about the game, which will be on Sunday, February 2, in Jersey City, New Jersey, playing against the Seattle SeaHawks.  We will be watching from the comfort of our home here in Colorado. 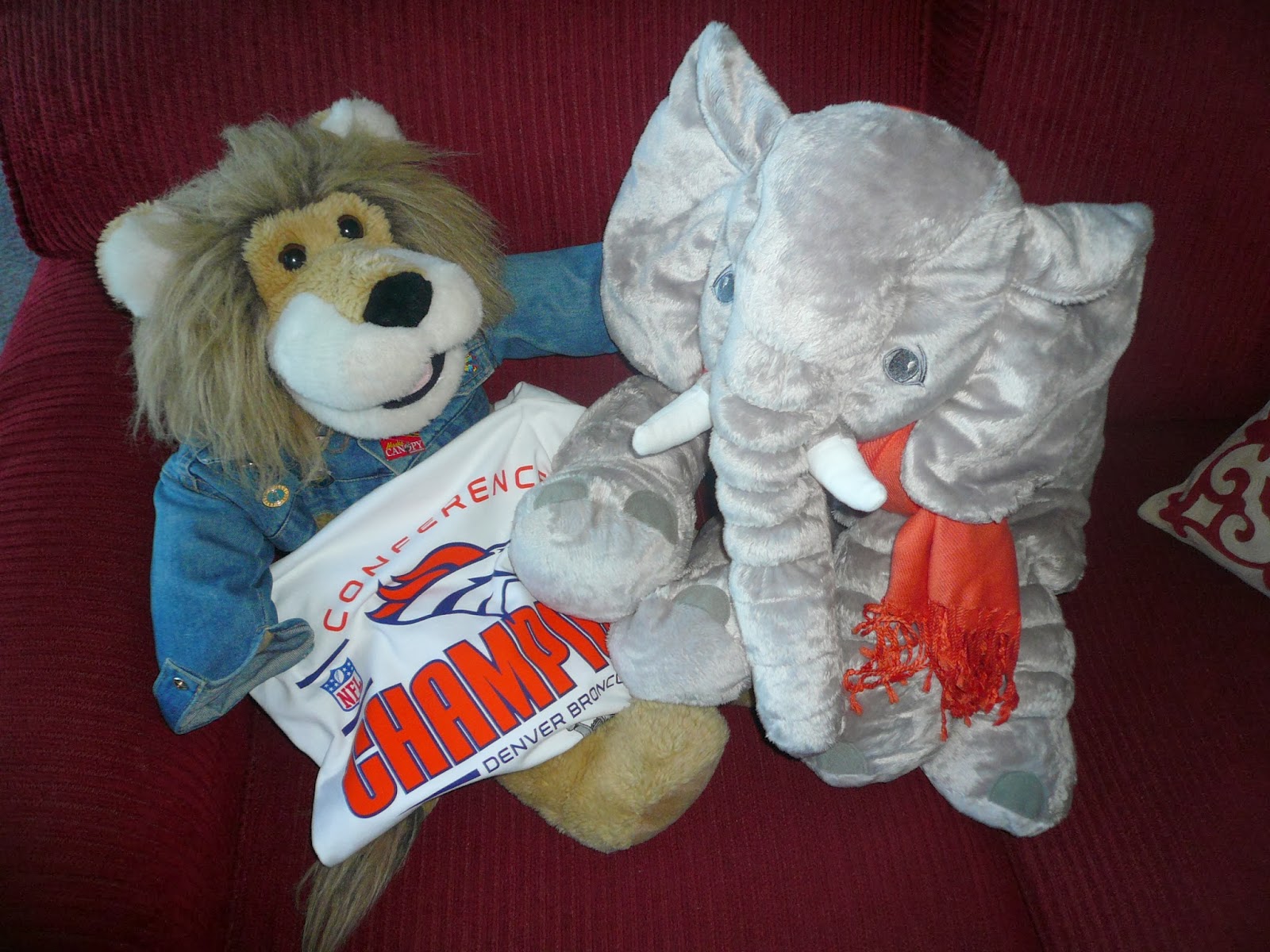 My alter-ego, Hobbes and his new friend, Celeste, are getting ready for Sunday.  Hobbes is trying to explain the "no huddle offense" to Celeste, who being an African elephant, and only familiar with soccer, wants to know all the details.  GO BRONCOS!
Posted by loverofwords at 9:54 AM 3 comments:

To Pot or not to Pot? That is the question..

Sometimes I feel as if I am living in a parallel universe.  Here in Colorado, my beloved state, we have legalized marijuana!  How did this happen? There it was on the ballot -- I could not imagine that it would be voted in, but I was wrong, very wrong.

Now we even have a "pot editor" for The Denver Post.  On the day of the home and garden issue, there were suggestions for how to grow your own. The day of the cooking issue, yes, there were recipes for using cannabis. Even on the sports pages, ("Should we excuse athletes for using marijuana now that it is legal?"), there was a page discussing the issue.

There are so many negatives.  Yes, I understand the plus side, that for cancer patients and others who are in pain or have nausea, marijuana can be very helpful.  But for children and teens who are going to try it, even though it is sold for those who are 21 and older, marijuana can be permanently damaging.

The Denver Post did have an article about "How to talk to your teens and young adults" about marijuana.  Bottom line, one out of six teens who try pot will become addicted.   It's not safe to drive when high, IQ scores go down, concentration is difficult, grades can suffer, inhibitions are dulled, effects can last longer than alcohol.  Whatever happened to "Children are our future?"

Today, in the food section, the main article was featuring a catering service that will have cannabis parties.  No, they don't serve cannabis, but the parties feature special food that will be enhanced by smoking pot. Bring your own, but of course, be 21 or over.  Oh, so chi, chi!

Our own county has banned pot, which counties can do, but the whole thing is a Pandora's Box -- think of drivers on the road, under the influence; skiers skiing while under the influence; businesses suffering because their employees are unreliable.  There used to be a drug test for employees, and the employer could refuse to hire a person who did not pass -- now what?  I suppose the employee could sue for discrimination.

We are now known as the "Stoner State."

Be careful what you wish for.