Near us is a horse farm and their latest borders are two Sicilian Donkeys. This is my first opportunity to learn all about these special animals and pretend that I own them and have them on my mythical ranch.

They are two females from Texas, over ten years old, and are Sicilian Donkeys because of their black stripe over their withers and down their back.  The legend is, I learned from their owner, that a donkey followed Christ as he was carrying the cross and the shadow of the cross fell on the donkey and created the crossed black lines on the donkey's back.  And of course, like all legends, there are different versions.

The breed is very old and donkeys are pictured on ancient Egyptian wall paintings. Used to "break" trails for hikers as they seem to know the best trail and are used as the lead animal for camel treks in the near east and elsewhere.  Many ranches use them as companions for skittish horses and to guard sheep.  They will stomp a coyote to death if one crosses their path or gets into the paddock.  Sicilian Donkeys are affectionate and love attention.

In third world countries they are invaluable as a pack and work animal. Unfortunately, they mimic the life of their owners there and are often malnourished and poorly treated.

But here in the states, they are often just pets, as these two.  Besides carrots, we also learned that their special treats are peppermint candies, like those red and white ones one gets from restaurants.  We have so much fun giving those treats, not many at one time of course, to these donkeys.  And they love them, chew them slowly, and half close their eyes to enjoy the whoosh of the peppermint flavor.  At about 7 AM, one brays to get the attention of the barn hands to remind them that it is time for their morning hay.  Not too many brays, just a few, but we can hear them too.  It is very effective. 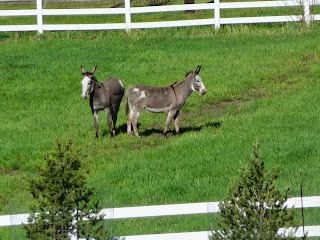 Post Script from the Wall Street Journal, 10/25.   Australia is using donkeys to protect their sheep against wild Dingo Dogs.  The wild Dingo dog population is increasing in Australia and because of this, the sheep are increasingly at risk.  Enter the amazing donkey!  Feral donkeys were rounded up from Australia's Northern Territory and sold to farmers.  Donkeys attack wild dogs and scare them away and can be very effective once they bond with the sheep.  Apparently they hate canines.  Because Australia is the world's biggest producer of wool this is a huge problem economically.  The numbers tell the story:  42,000 stock, mostly sheep were killed by these wild dogs last year.  Western Australia also offers bounties for every dog killed.
Posted by loverofwords at 10:14 AM 11 comments:

Adieu to a Special Friend

Today it is snowing in Castle Pines, Colorado.  The hummingbirds left two days ago, and yesterday was the funeral of a special friend.

It was a beautiful fall day, leaves just starting to change to yellow, crisp air, blue skies – a day my friend would have enjoyed.

As we walked into the church, saying a sad hello to some of her family, we found our seats.  Oh it was hard to keep the tears back as a wave of memories of my special friend came back.

Special friends are those who you do not see every day or call often, but they are the friends that somehow stay in your life for years, through Christmas cards and occasional calls.  Sometimes you don’t see them for years, but then you reconnect when you are in the same city and it is like you saw them yesterday.  But because of their presence, they enhance your life.

Robin was a Francophile; she admired France, its people and its culture.  And so when her family was grown and gone, she was able to indulge her passion, polishing her French taking lessons over the years,  and traveling, especially to France.  One way that the traveling was made easier was to arrange a house exchange, which she did over the years, not just to France but the UK and other countries.

We were able to share in one of her exchanges.  When I remarried, she, her husband and youngest daughter were staying at the Loire Valley in a remodeled French farmhouse and since, for my wedding trip, my husband, my son, and I were visiting the UK and France, we were invited to come down to the Loire valley and visit them.

In my wedding album, I have a letter from Robin, on lined notebook paper, giving us specific instructions to the place, complete with a little sketch.  I was so excited, so after sightseeing in Paris, we were on our way to the Loire Valley and a farmhouse named “Louvignan,” Could we manage to find our way out of Paris to our destination?

My new husband, who is also a light plane pilot with a pilot’s sure sense of direction, did find “Louvignan” in spite of the many road signs with what seemed like arrows pointing in every direction.

The highlight was a dinner in a nearby village which Robin had arranged.  In my mind all the romantic images of France came together that evening – we ate upstairs in a special room overlooking a cobblestone courtyard.  Robin ordered in French, of course, and even though I do not remember the menu, I remember the feeling I had, of a calm bliss, that here I was a new bride, albeit a second time, in a story-book place.  And of course, when we left, the courtyard was bathed in moonlight.  A magic evening made possible by a very special friend.

So adieu, my friend.  I shall miss you, more than I can say or write.
Posted by loverofwords at 11:12 AM 10 comments: