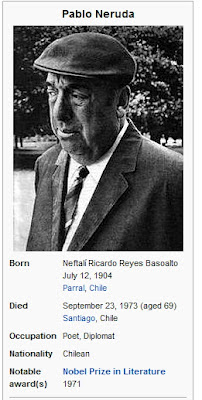 N is for Pablo Neruda


Poetry is difficult to write about.  It seems ephemeral to many,  some people hate it, but there are countries, especially in South America, that revere their poets.  One is Chile and that poet is Pablo Neruda.


He was born in 1904 in Chile, and "enjoyed from an early age the luck of attention."  And from an early age he absorbed his country's sights, sounds and atmosphere.  During his lifetime, he had many roles, diplomat, senator, politician, but always a poet first. He witnessed the Spanish Civil War and wrote a bitter, passionate poem about what he saw called, "I'm Explaining a Few Things," "Explico Algunes Cosas," a poem/painting like Picasso's 'Guernica."


One of his most famous poems is many times simply referred to as, '20.'


"Tonight I can write the saddest lines.
Write for example, 'The night is shattered
and the blue stars shiver in the distance.'


The night wind revolves in the sky and sings.


Tonight I can write the saddest lines,
I loved her, and sometimes she loved me too."


He has a huge  body of work, some historical, about the history of South America, some political.  He became a communist when he returned from Spain and wrote some very passionate poetry, intense and filled with imagery. He was awarded the Nobel Prize in Literature in 1971.  He died in 1973 a few days after the coup in Chile in which Salvador Allende was assassinated..


Gabriel Garcia Marquez called him: "The greatest poet of the twentieth century, in any language."

Poems by Neruda can be found on the internet, hard to put more here.  Thoughts, questions, familiar with Neruda?  poetry lover or not?

Posted by loverofwords at 4:00 AM